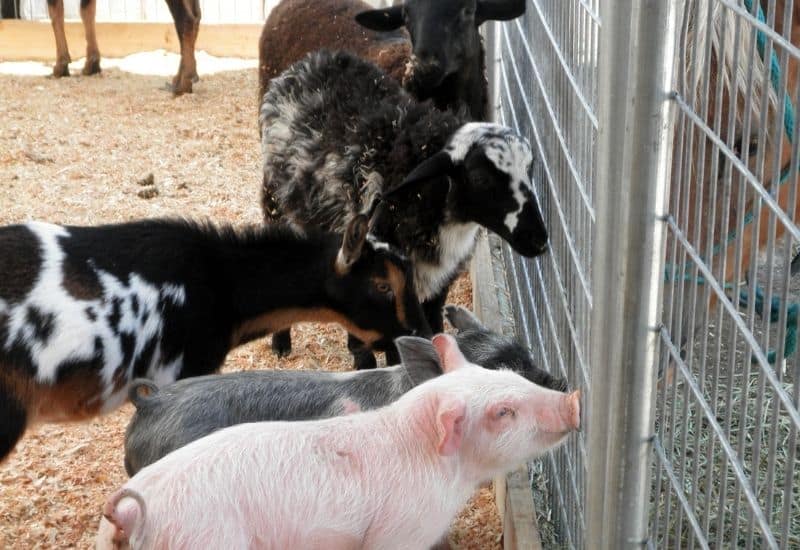 When deciding on how to manage livestock, knowing which types of animals can live together is essential for harmony on the homestead. No one wants animals fighting and getting injured or worse. So, can pigs and sheep live together? Will they happily coexist, and even become friends?

The best way for pigs and sheep to live together is to provide enough land and feed for each. Sheep require grass when grazing, while pigs need an area to wallow. Pigs and sheep should be kept in separate pens at night, especially if they have newborns.

Pigs are omnivores, and sheep are herbivores, making them two very different animals. Pigs also have tusks that can pose a danger to other animals and dig up the ground in search of food. Because of this, many owners are hesitant on keeping the two together. So, can pigs be mixed with the less aggressive, grazing sheep? Let’s take a look at how these two species can safely live together.

Do Pigs and Sheep Get Along?

Pigs and sheep will get along or live side by side without taking much notice of each other under the right conditions. Pigs can be territorial, and at times aggressive about what they think is theirs. They need and get along well with other pigs. The same applies to sheep.

Before mixing pigs and sheep, become familiar with their personalities. Some sheep can be head-butters and attempt to headbutt a pig. The pig will not see it as playing but an act of aggression which can lead to fighting. In the end, if the proper measures are taken, pigs and sheep can learn to get along.

Pigs living with pigs will determine a pecking order and lay down the law of who’s boss. If there is a dominant sheep, it can cause an issue if the sheep tries to take charge.

Additionally, never leave pigs with sheep if there are piglets as the sow can be protective. The same goes for lambing. If either the pigs or sheep are birthing and have young babies, separate them and keep them separated until the lambs and piglets are at least a few weeks old. Even then, slowly introduce them to each other (keeping them in a separate paddock within visibility can work well when introducing).

Tips to Graze Pigs and Sheep Together

One of the most important aspects of successfully grazing sheep and pigs together is space. Make sure they have enough space to go about their natural behaviors without interfering with each other and the pigs destroying the entire pasture. Don’t overload the pasture with too many animals.

If you graze pigs and sheep together, create an environment that suits the needs of both species. Sheep love grazing while pigs prefer rooting and wallowing. Include a wooded area with mature trees in a section of the pasture. Pigs love rooting in these types of areas and enjoy the shade of the trees.

Good fencing is also essential, especially for sheep, who are great escape artists. Running a hot wire will help both pigs and sheep respect the fence and reduce the risk of damage or escapes.

Sheep graze for several hours a day, mostly in the early morning and in the afternoon. They don’t just eat grass, but will search for other plants such as flowers. The climate and if the ewe is pregnant will affect the amount and quality of the plants a sheep needs.

Pigs, like sheep, do well on a pasture of mixed legumes but will need additional feed to ensure their nutritional and appetite needs are met.

Another concern with pigs is that they root the soil looking for food and minerals, ruining the grass that sheep need. Some say that certain breeds of pigs, such as Yorkshires, Large Black, and Old Spots have less of a rooting behavior, however, this is up for debate.

Provide a designated rooting area for the pigs where you can bury food and toys to encourage them to root in specific areas. This will also reduce the chance of them destroying the grassy areas.

Pigs will also need an area to wallow. Often, they will create this themselves by spilling water onto the ground. Since pigs don’t sweat, this is how they cool down. They’re also more likely to create their wallow in a shaded area, which helps block the heat and sunburns. You could even construct a cover over one drinking area to provide some extra shade.

Ensure your pigs have access to a wallow area and spread out drinking points in the pasture so the sheep don’t have to trudge through the mud for a drink.

Parasites are another concern when grazing pigs and sheep together. They’re both susceptible to the same parasites, so you’ll need to have a deworming process. If possible, it’s also a good idea to rotate pastures and let the land rest for several months. This can help reduce the parasite contamination of the land.

Lastly, when grazing pigs and sheep together, it’s necessary to keep pigs’ tusks trimmed. Tusks can become sharp and can cause serious injury or even death to another animal.

Can Sheep and Pigs Sleep in the Same Pen at Night?

Pigs and sheep should sleep in different pens at night. Sleep needs and habits, as well as feed requirements, make shared sleeping quarters impractical for these two. Provide clean and dry pens and bedding to reduce the risk of sickness and parasites.

Also, try to schedule supplemental feeding for a time when they are in their own pens. This will help prevent the pigs from hogging all the food from the sheep.

Keep in mind that sheep and pigs have different nutritional needs. Separate feeding allows for both species to get what they need and avoid minerals that they shouldn’t get. It may be a good idea to spread out feeding stations in both pens so the dominant animals don’t push out the weaker ones.

Pigs also need a sleeping space where each animal has a clean, dry, warm area to avoid health problems. Dominant pigs will take the prime sleeping spots, so it’s important that weaker pigs have suitable places as well. Pigs will sleep up to seven hours a night and nap for a few hours during the day.

Sheep sleep for short periods and usually together. As they are prey animals, they sleep in groups for comfort and protection. Sheep usually only sleep for four hours in total a day.

Overall, sheep and pigs should be keep separate at night to protect both their safety and given feed.

Sheep and pigs can graze together while meeting their nutritional and behavioral needs. However, to be successful, enough space and stimulation are needed. Always introduce a new animal into the group slowly, ideally through a fence. If you have limited space, it may be better to keep pigs and sheep separate for now.

link to 3 Quick Steps To Revive a Dying Citrus Tree

There was a time when my potted Meyer lemon tree was dying, and I was pressed on time to figure out why. Unsure of where to start, I started doing some searching online and tested some solutions....

Continue Reading
link to Do Citrus Trees Have Invasive Roots?

My parents have several citrus trees on their property and they're looking at getting a few more. The only thing is, they're considering planting them near the house. So, to help them out, I did a...