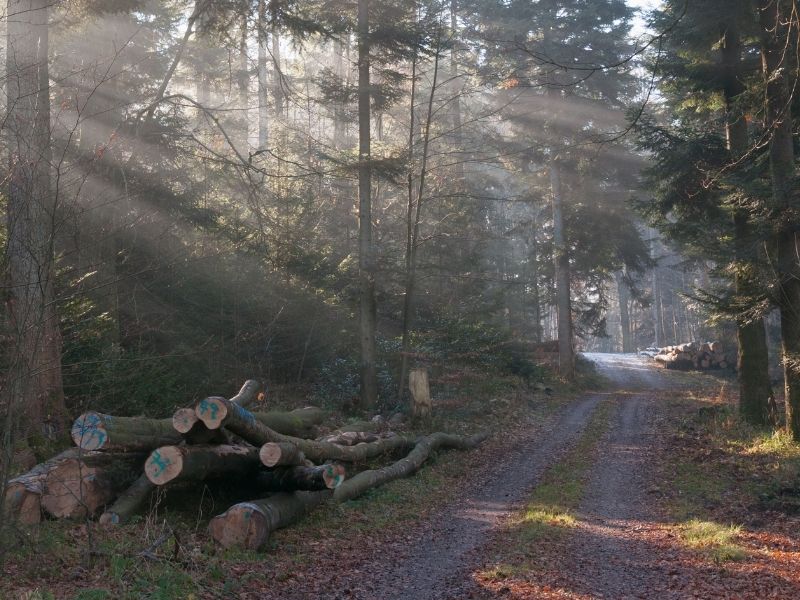 When I go camping or take a trip to my extended family’s cabin, I find that I usually need to pick up firewood, so I head to the store. But I’ve recently thought, “What if I didn’t have to buy firewood? Is it legal to just pick it up on the side of the road?”. So, I did some research to help answer this once and for all.

Generally, it’s illegal to collect firewood from the side of the road from both public and private land. However, if you can get permission from the forest service office or the private landowner, you shouldn’t have issues collecting some wood. Get their name and written permission if possible.

However, it’s not black and white. Collecting firewood from land other than your own could be considered theft depending on how you do it. There are some factors you should be aware of, such as which land is public and private, how to obtain permits, and if you can take wood that’s left on the curb for disposal. Let’s take a further look.

Is It Legal to Collect Firewood From the Side of the Road?

Some people collect firewood from the side of the road without permission, on both public and private lands and don’t run into any issues. Some get fined or arrested. While you likely won’t get stopped if you’re looking for wood for the occasional campfire, filling your pickup bed will attract more attention. Either way, it’s usually seen as a form of theft as you are taking something from someone’s property.

Because it’s considered theft, collecting firewood from the roadside is something that could get you in trouble with the law. Even taking a pile of cut wood that’s on the side of the road or left on someone’s curb, may not be legal to take. To avoid legal trouble, get permission, and still be prepared for any possible questioning.

Local and state laws can also vary, so if you want to be safe and get the most accurate information, make sure to do research on your forest region.

Where Can You Collect Roadside Firewood?

Once you have permission, you can collect firewood from several different areas, both public and private. These include:

When construction sites clear land for development, they often pay to have the lumber taken away. If you see them cutting trees, ask them what they’re planning on doing with the wood. If they’re paying to haul it off or burn it, ask if you can take it off their hands. It’s less work and money from them, so more often than not, they’ll say yes.

The same goes for trees cut down for power lines. Most times the tree will get cut down and left on the side of the road to be picked up or shredded with a wood chipper. If it’s alright with the power company, you can normally take the wood (you may have to call their office first). However, if they say it’s not up to them, you can check with whoever owns the land. If it’s publicly owned or reserved land, contact the forest service office or local government. If it’s private land, check with the landowner.

Also, you may want to check with the Department of Transportation (DOT) before pulling over and hauling the wood away. Even though you may have permission to take the wood, stopping or parking on the side of the road could get you a traffic or safety citation.

When it comes to private land, many owners will be glad to get rid of their fallen or dead trees. And many times they’ll let you haul it off for free. If you’re able to find the owner of the land, let them know that you’re looking for firewood and you’re willing to cut down their problematic trees. Many times people won’t have an issue with this, however, it’s always smart to get a written agreement and a name in case you need to explain it to anyone.

From there, you can haul the wood off the property and split it on your own time.

Can You Collect Firewood From a National Forest?

Even if the tree is dead, fallen, or diseased, you could be breaking the law by harvesting it. It’s illegal to take wood from national forests, parks, public land, reservoirs, and reserves. You could get fined between $300-$1000, along with having your equipment seized (like chainsaws).

According to the USDA Forest Service, and depending on your forest region, you can purchase permits or tags to gather firewood in national forests. Usually, this means half a cord at a time, but the amount depends on the region. Most times you can only remove certain trees such as dead or downed. Some tree sizes and species are off-limits and reselling wood usually isn’t allowed. For more information and to check your forest region’s rules, visit the USDA Forest Service website.

Whether you’re using firewood for a bonfire or your wood-burning stove, there are a few ways you can collect firewood from the side of the road legally. Checking with construction sites, power companies, landowners, and national forest services can all be ways you can get free firewood. While some people and services won’t care if you harvest firewood (especially in small amounts), others will question you. If you can get it, try to get explicit and written permission, otherwise, you could be caught in a bind.

As a disclaimer, this article is not legal advice. This post is written from my experiences as well as others across the web. Please refer to your local laws before taking any action.

link to Can Fruit Trees Grow in Rocky Soil?

While looking into cherry trees' viability in Texas, I came across some homemade fertilizers for them. One that caught my eye was coffee grounds. I wasn't able to find an answer if they were good for...