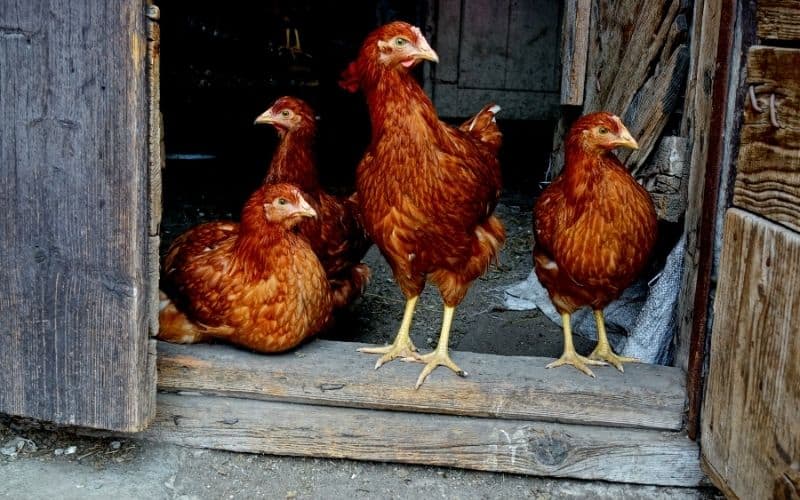 Many chicken owners like free-ranging their chickens in an enclosed run and have quite a few protections around it such as a fence, roof, and guard dogs. But are these protections enough to protect the coop that’s inside the run as well? After all, many predators can smell chickens and will try their best to find a way into the run and therefore—the coop. So, should chicken coops have a door, and should it be closed at night? I did some research to find out more.

If your chicken run is predator-proof, your chicken coop likely won’t need a door. However, most chicken runs are not predator-proof and would benefit from the extra security that a door offers. If it’s too difficult to get into the coop to close the door, consider getting an automatic door or one on a pulley.

So, while chicken coops can greatly benefit from having a door, is it really necessary, and do you need to close it at night? Let’s take a further look.

Do Chicken Coops Need To Be Enclosed?

Enclosing a chicken coop is a recommended practice due to clever predators in the area. However, closing the coop depends on your confidence in how well your run can protect your flock. If you’re sure the run is predator-proof, you likely won’t need to enclose the coop. When in doubt, keeping it enclosed is best.

It may be surprising to some, but there are a few pros to not having an enclosed coop. Owners who are sure their run is secure like leaving their coop open to reduce the amount of time and effort they use to take care of their flock. Additionally, they’ll often leave it open to create a draft on extremely hot nights.

However, while open coops can have their benefits, they also have some disadvantages.

First, there are quite a few clever predators that can find ways to get into the run, and therefore—the open coop. Predators are good at finding ANY gaps in the run. This is typically done at ground level. If your fencing or other materials aren’t sturdy, they can even break into it and create their own gaps.

Some predators, such as raccoons, are notorious for being sly and can open poorly attached fences, mesh, and even doors to get into the coop.

To further review door safety, let’s take a look a closer look at if you should leave a chicken coop’s door open.

Can You Leave a Chicken Coop Door Open?

Chicken coop doors can be left open if the chicken run is secure. A couple of advantages to leaving a coop door open is to reduce the workload of herding the flock as well as providing a draft on hot nights. However, some concerns to open coop doors are an increase in predator break-ins and drafts on freezing nights.

One of the biggest concerns most chicken owners have when it comes to closing their coop doors is that it’s one more thing to do every day (and night).

This is why automatic coop doors are so popular. After all, if you can automate the feeding and watering, why shouldn’t you try automating the task of opening and closing the coop?

Many coops have hard-to-access doors and require climbing into the run or even part of the coop. Additionally, chicken runs can be easier to clean if you can keep them in their coop.

However, keeping a chicken coop door open isn’t ideal for two reasons. The first is that predators that make their way into their run now have free access to the coop. Secondly, cold nights can become even colder from the drafts created by the open coop door.

On the other hand, if you’re in a hot climate, then you might be considering leaving the door open to create a beneficial draft. If you’d like to do this but are still worried about predators, consider installing a removable screen that fits over the opening for the door. By using a screen like this on hot nights, you can get both protection and ventilation for your coop.

Additionally, if you’re not a fan of having to go into the run and open and close the door, many owners say that automatic coop doors are incredibly helpful. One of the only downsides to automatic doors is that they can cost about $100-$200. However, they can be worth it if your setup and budget allow it.

Keep in mind that one shouldn’t fully rely on automatic doors and should still check on chickens before locking up. If the flock isn’t checked on, it’s possible to close a predator into the coop, causing an even worse problem.

If you like the idea of an automatic door, but you’re more of a DIYer, then consider making your own door using a pulley system that can close the chicken coop from the outside of the run.

Should You Close the Chicken Coop Door at Night?

If the weather allows it, chicken coops should be closed at night. As many predators are nocturnal, this will greatly increase the amount of protection for your chickens. If the nighttime weather is too hot, and you’d like to leave their door open to create a draft, confirm that the run is secure first.

Some nocturnal predators that commonly feed on chickens are:

If you’re interested in learning more about common chicken predators, you can check out this post by scoopfromthecoop.com.

Which Doors Are Best for Chicken Coops?

The best doors for chicken coops are sliding doors. This is because the doors have more leverage from the extra lip as well as predators have a hard time opening them. For convenience, these doors can also be automated. Chicken coop doors that are on a latch aren’t as secure and can even be undone by some predators.

If you currently don’t have a door for your coop and are looking for a good, secure door that also opens easily, consider getting a sliding door. These are easy to open and have increased security over coop doors that are on a hinge. Hinged doors can be undone if the predator figures out how to lift up the latch (which some predators, such as raccoons, can do).

To add to this, if you like sliding doors, but don’t like the manual effort of going into the run or coop to open and close them, then consider getting an automatic sliding door. There’s a reason why they’ve become so popular for chicken coops.

Keep in mind that it’s still a good practice to check on your flock regularly as predators can sometimes find or create new gaps in the run and coop. This will also help prevent accidentally locking predators into the coop.

If you’re interested in getting an automatic door for your coop, ChickenGuard on Amazon is one of the most popular and reputable brands among chicken owners.

Can Chickens Go Through a Flap Door?

Chickens typically can’t go through a flap door that cats and dogs commonly use. However, you can use rubber strips over the door with gaps (much like a large, walk-in freezer). As long as chickens can see what’s on the other side, they’ll be able to go through the door.

Flap doors can be much more affordable than some other door options (such as automatic doors), so installing one can make sense. However, most flap doors obstruct the view to the outside, so chickens see it more as a wall or closed door. Having rubber flaps not only show a bit of what’s on the other side, but they sway in the wind and can signal that they’re movable.

link to 7 Things to Know Before Buying a Fruit Tree

I love fruit trees and not just because I have a major sweet tooth. There's something fascinating about caring for fruit trees and learning about their needs. And if you do well, you get rewarded...