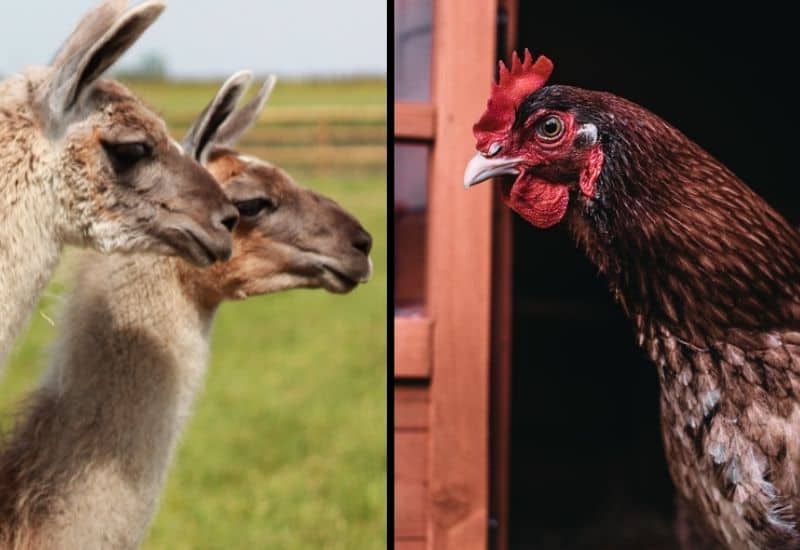 While I’m planning on getting alpacas on my homestead, llamas might be the better choice. They have similar behavior to alpacas and can function as a livestock guardian, so other livestock can benefit from their protection. While it’s known that llamas get along fairly well with goats and sheep, will they also be friendly towards chickens? I set out to find the answer. Here’s what I found.

Llamas can get along with chickens, but not to the extent of sheep or goats. Llamas are herd animals and need to be part of one. While sheep and goats can fill this need, chickens are too different for llamas to feel like it’s their herd. However, llamas can be friendly towards and even occasionally protect chickens.

So while llamas can get along with chickens, are they the best choice for a livestock guardian for chickens?

Llamas normally bond with the livestock that they’re raised with. Additionally, their size and temperament can help them drive off predators. This is why many goat and sheep owners employ a llama or two as a livestock guardian. However, what about chickens? Will llamas also protect them?

While llamas can protect livestock well, unfortunately for chickens, llamas don’t normally see them as part of the herd. While llamas can drive off some predators, they can also stand by and let the chickens (or themselves) fall prey to predators.

The chance that your llama feels protective of your chickens is up in the air. It can help if the llama is raised with chickens, but normally it’s not too common for them to bond. Even worse, llamas could guard the chickens against you too, especially if they think you will hurt them. Before bringing a llama onto your farm, ask the breeder or seller if they’re okay with being handled by a human.

Despite not being the best chicken protector, they can get along well on the same pasture. Only the rare and temperamental llama should be separated in a different paddock.

If you were looking at llamas purely to guard chickens, choosing a dog (great Pyrenees are a popular choice) or geese as your chicken’s livestock guardians would likely be a better fit.

Can Llamas Hurt My Chickens?

There’s not a high likelihood that your llamas will attack or hurt your chickens. However, if your llama has a behavioral issue, there’s a chance they won’t get along. If things get bad enough, one of them could get hurt, but again, it would be rare.

For best results, either try raising the llamas with your chickens. If you have to introduce llamas and chickens at a later age, take 1-2 months keeping them in separate paddocks, but in line of sight of each other. Over those couple of months, they should be used to being around each other and can be moved in together.

In the beginning, supervise them to see if there are any early problems and to get a good gauge of how they’ll treat each other. However, if your llama doesn’t see the chickens as part of the herd, they can become depressed or temperamental.

How Long Will It Take for a Llama to Get Used to Chickens?

If a llama is raised with the chickens, they can have an easier time bonding. While this can benefit both livestock, sometimes llamas have behavioral issues if they’re not raised with other llamas. The lack of development by not being around other llamas can lead to a few personality issues and bad habits, such as aggression. But assuming the llama is well-behaved, how long can it take for them to get used to chickens?

It can take 1-2 months for llamas to stop alarming and get used to chickens. During this time, keep them in separate paddocks (but within line of sight) and introduce them once the 1-2 months are over. Supervise them, and if all goes well, the llamas will have adjusted to being around the chickens.

However, even if you get your llama from a good breeder and they don’t have any developmental issues, they still might never get used to chickens. Normally, llamas prefer to be in a herd with their other four-legged mammals like goats and sheep.

How Many Llamas Do You Need for Your Chickens?

Generally, llamas need a herd, however small, so you should get at least two when raising with other livestock. An advantage of having two llamas is that they can keep out larger or multiple predators easier. They’ll also get less lonely. If you have sheep or goats, a single llama should be okay.

However, factors like acreage, the number of chickens, and the number of predators will be the deciding factors on how many llamas you should get. If you’re finding your llamas are outnumbered or the land is too large to cover, consider getting more llamas (or other livestock guardians like dogs or geese).

Llamas can get along with chickens, but might not ever really feel quite at home with them. Some might even develop behavioral issues such as spitting or aggression. They can even start to protect the chickens from you.

Llamas can make great additions to a homestead but do best with they’re with alpacas, sheep, goats, or other llamas. If you’re thinking about using llamas as livestock guardians for your chicken flock, dogs or geese will likely do a better job at keeping a watch out and driving away predators.

link to Can Fruit Trees Grow in Rocky Soil?

While looking into cherry trees' viability in Texas, I came across some homemade fertilizers for them. One that caught my eye was coffee grounds. I wasn't able to find an answer if they were good for...