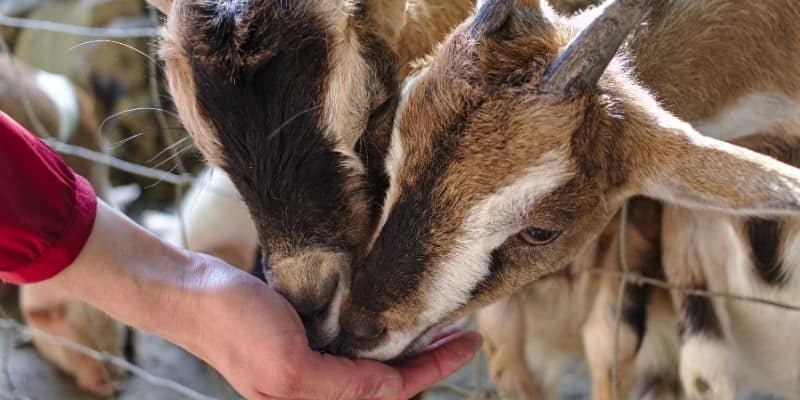 Growing fodder is possible on just about every homestead and giving it to your goats (alongside their regular grazing) helps tremendously with nutrition. Fodder is commonly made of hay, straw, grains, and sprouted legumes, and while it’s usually incredibly easy to grow, is it safe to feed goats?

Fodder is good for goats as a supplemental part of their diet. Fodder provides an increased nutritional value that is important for growth, milk production, and overall health. Additionally, the nutrients from fodder lead to other benefits such as an improved immune system, longevity, and lifespan.

So while fodder is good for goats, what are the different types of fodder and how much fodder should you feed goats? Read on to find out!

Simply put, fodder is food that’s given to livestock as opposed to the food they forage for themselves. Many domestic animals eat fodder as a supplementary or complete part of their diets.

Fodder includes a wide variety of plant sources such as:

Goats have a reputation for eating anything from tree bark to tin cans. In reality, goats will forage for hay, grass, and weeds in their pastures.

Most goats are given additional grains on top of their foraging for their increased nutritional value and high-calories. Grains also provide extra protein, vitamins, and minerals which helps balance a goat’s diet.

Any animal that eats hay or grain will do well on fodder, and this includes goats! Not only can goats eat fodder, but some varieties of fodder provide additional health benefits for livestock.

Is Hydroponic Fodder Good for Goats?

Sprouted grains and vegetables that are grown hydroponically are a good source of nutrients for goats, but they’re not a good substitute for hay. It’s important to not replace their diet completely with fodder (hydroponic or not) as it can cause digestive issues such as bloating. Instead, use fodder as a supplement.

Hydroponic fodder is livestock feed that has been sprouted from seeds with little to no soil and water usage. This feed is typically grown by soaking seeds, allowing them to sprout, and continuing to grow in primarily water (or a soilless medium) until they’re ready to be eaten.

Hydroponic fodder is typically made of barley due to its ease of growth and high nutritional value.

So, while hydroponic fodder is good for goats, it’s important to make sure that they’re still receiving a well-balanced diet. Feeding goats fresh pasture daily will help them stay happy and healthy.

Goats need to eat dry roughage to aid in digestion. The long fibers of hay help the rumen, or first stomach compartment, function properly. A proper diet of both dry roughage and hydroponic fodder is ideal for a healthy goat.

Once sprouted, instead of using dry seeds, hydroponic fodder can triple the weight of feed that the goats receive. Feeding this type of fodder to goats provides a green and nutrient-dense addition to their meals. This food source delivers increased levels of vitamins, protein, starch, and sugar which will help goats stay healthy. Also, sprouts are easier to digest than other feed sources.

Growing hydroponic fodder is especially useful when goats have limited access to a fresh green food source. Limited access to pasture can happen in the winter months when foraging is sparse, in smaller pastures that don’t allow for free-range grazing, or in pastures that are heavily impacted by drought.

Benefits of Growing Fodder for Goats

Using fodder as a supplemental grain provides goats with a balanced diet and helps them stay healthy. Growing hydroponic fodder can also help farmers and the environment by reducing the resources necessary to maintain a farm.

Growing and using fodder to feed goats has benefits for their health, their caretakers, and the environment as a whole.

While these benefits are still true for fodder that grows on pasture, hydroponic fodder can be even more beneficial as it reduces the required amount of land, equipment, and resources (such as water).

Overall, fodder is sustainable and requires minimal effort to grow. Additionally, it keeps goats (and other livestock) healthier, with a high potential for increased lifespan.

Health Benefits of Fodder for Goats

Hydroponic sprouts are closer to the plant foods that a goat’s digestive system was designed for. This allows their rumen to stay healthier while receiving more bio-available nutrients and enzymes from the nutrient-dense fodder.

Fodder also improves goat health and quality of life through additional health benefits such as:

So, fodder is a great food source that provides green, hydrating, and nutrient-dense food for goats in the winter months or even year-round. Adding hydroponic sprouts to a goat’s menu will greatly improve their health and with that—make your job of raising goats that much easier.

The biggest advance of growing fodder is that it allows farmers to maintain more independence from outside feed sources. Fodder gives a greater sense of control over what the goats are eating instead of being at the mercy of the weather.

For example, in a drought the foraging options are limited and feed prices tend to skyrocket due to the increased demand. Growing hydroponic fodder will lessen the impact of any shortages on your feed source.

Additionally, hydroponic fodder is a great way to save money. The rising costs of grain feed and reduced pasture land for grazing have inspired many farmers to switch over to growing their own food.

Dry feed can be expensive to buy and to store which increases operating costs for a farm. Sprouting dry grain seeds can produce around triple the amount of feed weight which helps to lower costs.

The improved level of nutrients in fodder also means that goats will stay healthier and generally require fewer veterinary visits and costs. The nature of a goat’s diet also impacts the level and quality of milk produced by a goat.

Including fodder as part of a well-balanced diet will improve milk production as well as the price of the resulting meat and cheese products.

Finally, growing hydroponic fodder is much more efficient than any other way of producing your own livestock feed. Home-grown feed means that fewer types of grains need to be bought and stored which makes your life easier. Additionally, the effect of additional and higher quality nutrients for goats means that less manure is produced.

Despite the reduction in the volume of goat manure from fodder, the quality of manure will be far superior as fertilizer than before.

As you can see, feeding sprouted grains as fodder requires minimal labor in exchange for many benefits for your goats and farm.

Fodder Benefits for the Environment

Using fodder for goats benefits the environment and creates a more sustainable farm. Goats can eat the entirety of fodder from the sprouts to the root bed which results in less feed waste than pre-packaged bags.

Producing or purchasing most of the common types of livestock feed is much worse for the environment as the negative effects of monoculture and striping land of nutrients can last for generations. This is why regenerative farming is becoming a large factor for consumers when deciding to buy a farm’s products.

The improved quality of soil from regenerative farming can also lead to much higher water retention. For example, each 1% increase in a soil’s organic matter can help hold 20,000 gallons more water per acre.

How Much Fodder Does a Goat Need Per Day?

Goats typically need to consume 2-5% of their body weight in fodder per day. For the average dairy goat, this works out to be a daily portion of 3-4 pounds of fodder. This amount can vary depending on how much they forage on additional food sources.

Generally, goats eat 8-10% of their body weight per day in feed and forage. The majority of this amount is usually from hay and supplemented by grains or hydroponic fodder as needed.

The amount of feed that a goat needs can fluctuate depending on a goat’s age, health, and level of physical activity. Goats that are pregnant or lactating need more food to keep up with milk production.

Feeding goats high-quality nutrients is essential to help them produce quality meat and dairy products. It’s also important to provide the right amount of feed to avoid shortages and competition over food.

If you’re interested in growing hydroponic fodder, check out this step-by-step video by David Capocci for setting up a barley fodder grow room.

link to The 7 Best Fruits To Grow in Tropical Climates

I'm from Orlando, Florida, so it's safe to say that I grew up in a tropical climate (or at least subtropical). Growing up, I'd pass orchard after orchard of citrus trees and we even grew a few trees...

Recently, a few of our avocado trees flowered, but they were having trouble fruiting. We also noticed some of our trees weren't even flowering at all! As an avocado fanatic, this concerned me....