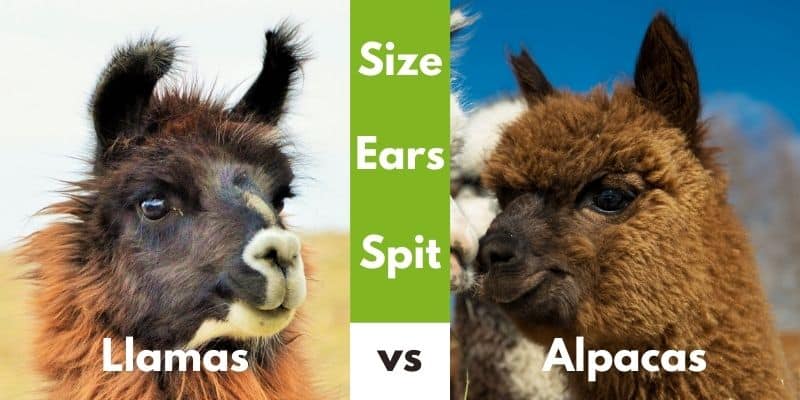 The main differences between llamas and alpacas are their size, ears, and fleece. Llamas are nearly twice the size, have banana-shaped ears, and grow a fleece that’s more coarse than alpacas. Additionally, alpacas are generally friendlier than llamas and spit less often. However, llamas make better livestock guardians.

But while these are the key differences when it comes to llamas vs alpacas, some specifics might help you out. Continue reading to see some resources that I’ve made to help show more about how llamas and alpacas are different.

1. Llamas Are Twice the Size

One of the biggest differences between llamas and alpacas is their size. Llamas generally reach a height of around 44″, or slightly under 4′ tall, while alpacas can grow to a height of about 35″, or right under 3′ tall.

While this doesn’t seem like much, the end result is that alpacas are about half the size, coming in at between 100-200 lbs, while llamas weigh 300-400 lbs. This can make quite a bit of a difference when you’re keeping them as livestock on your homestead.

For example, with their lighter weight and soft toes, alpacas don’t tread as hard, so they don’t crush and kill grass as other hooved-livestock can.

Additionally, with their extra size, llamas require more food and more land to range. It’s recommended to keep up to 4 llamas per acre, and up to 8 alpacas per acre.

So, if you’re looking to keep the most livestock per acre, then alpacas’ compactness wins this round.

The next main difference between llamas and alpacas is the size and shape of their ears. Llamas have larger, banana-shaped ears, while alpacas have smaller and pointed ears.

This is one of the easiest ways to tell llamas and alpacas apart, especially in photos where you can’t compare their size.

One of the most common questions for llamas and alpacas are if they spit. Here’s the answer.

However, if you’re thinking about raising alpacas, and you’re concerned about them spitting, know that this is something you’ll rarely have to deal with, if ever.

To learn more about why llamas and alpacas spit, and what you can do about it, check out this video by WildCiencias.

Alpaca wool is extremely well-known and prized for being lightweight, warm, and strong. On the other hand, most llamas have a coarser and shorter fleece, so it’s not as practical to farm or process. While there are some wooly llama breeds, it’s still not as common to use compared with alpaca wool.

Even though they have different coats, both llamas and alpacas need to be shorn every spring to avoid overheating in the warmer months. Since llamas and alpacas have been highly domesticated (originally from South America), they can no longer shed their coats on their own and require human intervention to survive.

While this may seem sad, there aren’t any llamas and alpacas in the wild, so intervening and shearing their fleeces on farms is common practice and they’re accustomed to it.

Okay, small detour–even though I don’t use alpaca wool, I switched most of my closet to merino wool (from sheep) and can vouch for the difference. My cotton and plastic clothes used to get dirty after one time of wearing them. Now, I can wear a wool t-shirt for a few days without it getting dirty or smelling. It sounds weird, but it’s true, and who doesn’t want to do less laundry? I’d love to try out some alpaca wool clothing soon.

Going back to alpacas, their wool is much softer than llamas, and with each fleece, or “blanket”, selling between $100 to $1,500, alpaca farming can definitely be a profitable venture. The pricing largely varies depending on the quality of fiber and how it’s processed.

Take a look at this table and data from Apple Mountain Alpacas:

Generally, alpacas are more friendly than llamas, however, there are exceptions. Their friendliness comes down to their nurture and their nature. Sometimes you’ll have the odd llama who’s more of a spitter or slightly more aggressive.

In any case, before you introduce a new member to the alpaca or llama herd, make sure to observe their behavior. While rescuing is a noble deed, it can sometimes lead to compatibility problems with the herd. Once you’ve deemed that the new addition should make a good fit with the rest of the herd, slowly introduce them.

A good way to do this is to keep them in a separate paddock, but in one where they can both see each other.

Over a couple weeks, let them occasionally run with each other while keeping an eye on aggression, competitiveness, or other negative behaviors.

If you’d like to see alpaca’s behavior in action, along with some other tips, check out this video by Happy Tails. Meghan is great with animals and I binge-watched some of her alpaca videos when I was first learning about them.

Now, whenever I see a picture of a llama or alpaca, it still takes me a second, but I can usually tell the difference (the ears are what I look at first).

If you’re deciding on whether to keep llamas or alpacas, it usually comes down to the amount of feed and land you can provide, as well as what you’d like them for. While you can keep more alpacas and use their wool, llamas are better livestock guardians and can occasionally protect chickens and other livestock.