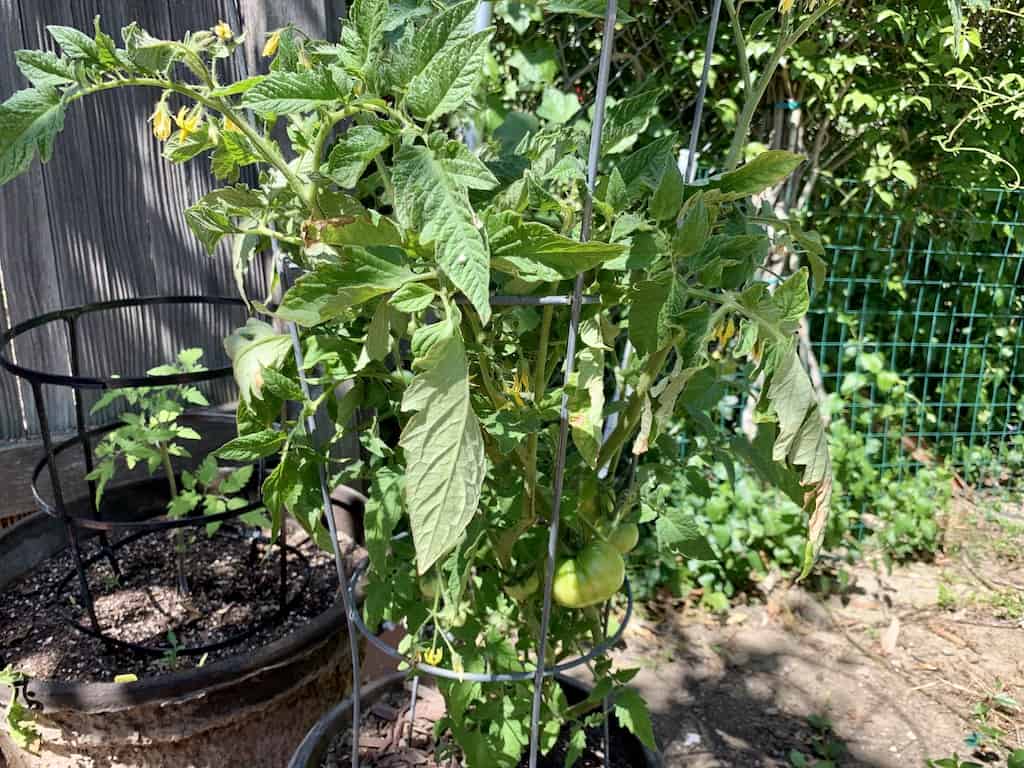 As you might know, Early Girls are a special type of tomato. They fruit about one week sooner than most other tomato varieties (around the 50-day mark).

Being an indeterminate variety, they also fruit until frost, which makes them a gardener’s favorite.

But they don’t come without threat. Disease, sunscald, and small fruit can develop without proper care.

The good news is that these conditions are easily preventable by pruning.

The bad news is that there’s a whole lot of pruning information out there.

When I started pruning my Early Girl, I was pretty confused and it took some time to know what, when, and how to prune. If you’re new to tomatoes, maybe you’re experiencing the same thing.

To help you quickly get comfortable pruning your Early Girl tomatoes, I put together this easy guide. Let’s jump in.

Pruning is the act of trimming excess growth to limit disease. It also trains the plant to focus on developing its fruit instead of growing branches. You can start pruning when the first flowers have come in (at this point, it’s also a good idea to support the plant with a stake or tomato cage).

Since Early Girl is an indeterminate plant, it’s a good practice to prune it.

To get started pruning your Early Girl tomato plant, use these 3 quick steps:

Identifying what to prune

Here’s a quick overview of what to prune on Early Girl plants:

Knowing what to prune was the most confusing part for me. I kept asking, “which stems do I prune?”, “what are suckers?”, and “why are some leaves turning yellow?”

If you have the same questions, well, let’s dive into the answers.

Which stems or branches to prune

After I didn’t find clear answers, I went out to observe my own Early Girl plant (I know, it was a far journey to the backyard).

What I found is that the stem had flowering sprouts growing out of it, but many of the branches didn’t. These flowerless branches typically grew close to around 90º out of the stem.

When I looked closer, I saw the stems had lots of fuzz (also called trichomes), while the branches had surprisingly few.

I’m not a professional, but if I had to guess, based on the amount of fuzz, it looks like the stem was receiving a lot of the energy and growth, while the branches received less.

With a bit more research, I found that this was likely the case. The plant was focusing on fruit and new growth, but many of the branches were still hindering its energy.

So, the nearly fuzzless branches were, in fact, the ones to prune.*

*Don’t go crazy on the pruning, the tomatoes still need some shade to prevent sunscalding.

Tomato suckers are the small sprouts growing in-between the main stem (also called the terminal stem) and the branches. They will form their own branch, flowers, and fruit eventually.

But to keep the tomato plant’s energy and sugars focused on healthy, plump fruit, it’s a good practice to pinch or prune these suckers off.

Two main rules here. You should prune your Early Girl if:

Before you get chop crazy, there are reasons why these two are important.

For one, you want your Early Girl to be mature enough to flower. This is a good indicator the plant can support itself and fend off disease (pruning can open the plant up for infection).

And two, you want to limit the amount of pruning in a week to give the tomato plant a chance to recover and heal its wounds.

As far as the time of day, there are some that say pruning in the morning is better because the plant is less likely to succumb to infection. But I’ve found success doing it mid-day, so when you prune is up to you.

When to “top” your Early Girl

You might have heard about topping your Early Girl. With it being an indeterminate tomato plant, it can get pretty high, maxing out at 12 feet.

Normally, it’s a good idea to top the Early Girl’s stem if it’s either getting too high (and producing more fruit trusses than it can handle) or if frost is coming.

This encourages the last fruit growth to mature before the frost, instead of using energy to grow taller.

If you’re planning on having multiple Early Girl tomato plants near each other, you might want to set each stem slightly apart.

Some of the branches and growth can interfere and entangle others, so there’s a strong focus on stem growth over branch growth here (vertical over horizontal).

Early Girls have to be my favorite tomato plant to grow. Well, it’s actually my only indeterminate variety (at least until my Carmello matures). But besides winning by default, it has been a ton of fun to grow and learn how to prune this fast-growing beauty.

Hopefully, this post has been helpful to you and I look forward to taking what I’ve learned about pruning over to my other plants that could use it.