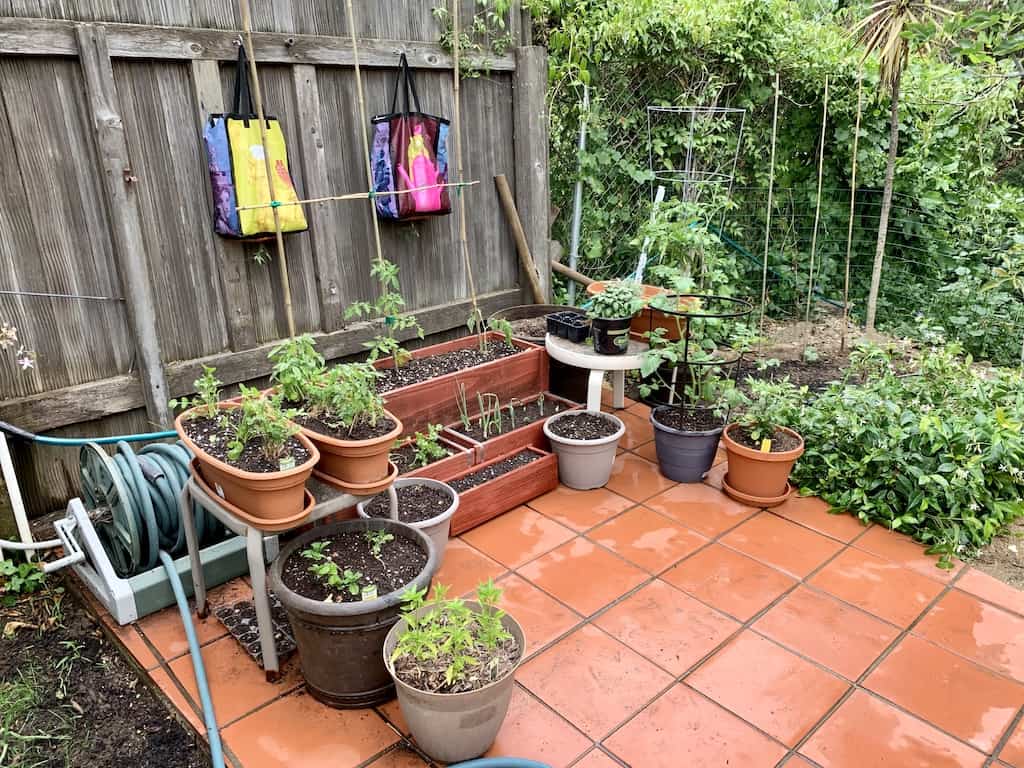 I think what drew me to urban homesteading was my effort to reclaim and simplify my life after getting distracted with all the LA things (and there are so many distracting things).

I’ve lived in Los Angeles for over seven years. First in an apartment, then in a van after jumping into van life, and finally–a house.

During quarantine, I’ve been staying with my family and I’m using these few months to learn more about homesteading. Instead of waiting until I have a property of my own, I was eager to get started.

From cold composting to talking about getting chickens (my parents are almost convinced), their property has been quickly changing. They started with a backyard with a few drought resistance plants, and now have one that focuses on soil and food growth.

Granted, two months is not a lot of time to grow many things, but the seeds of change are getting planted. And my parents are getting hooked almost as much as I am.

But, it’s tricky to start homesteading in LA.

Why it can be hard to start in LA

First, there’s the weather. Living in LA, our hardiness zones range from 9a to 11a, so you need to master the heat if you want your plants not to fry.

Next, is the space. LA is expensive, which means many people either live in a tiny apartment or a small home with an even smaller backyard.

These two challenges can make homesteading seem like it’s not worth starting.

But whether your dream is to have an urban homestead in LA, or to move out of the city to start a homestead in a more rural area, you can use what you have, right now.

Need some ideas on how to get started with your urban homestead in LA?

Seriously, I’ve had days where I “researched” all day (mostly watching YouTube videos) and got nothing done. Alternatively, I’ve researched for a short time (no more than an hour) and started creating something.

The key to getting started is to know which questions to ask.

Everyone has a different living situation, so there are different questions and problems to solve. But here’s some quick ideas that might help you get started.

Once you answer these questions, you will have a better idea of how to start your urban homestead in LA.

2. Use the space you have

We can daydream and wish we had more space all damn day, but that could be several years out. Instead, start practicing now!

My old studio had a 2×12′ balcony and I used that space to grow peppers and sweet potatoes. While I didn’t get great harvests, I learned a lot about what these plants need.

And even in the smallest spaces, you can grow microgreens, which are one of the quickest, easiest, and most nutritious options out there.

In my studio in LA, I grew microgreens indoors using coconut coir mats. That rig gave me lots of delicious greens such as micro radish, amaranth, and mustard. All you need is a grow-light, container, growing medium (like a coconut coir mat), and about two weeks.

At my parent’s house, I started them off with cold composting by using tea bags, coffee grinds, and eggshells. We started collecting these in a small container but quickly graduated to using a spare garbage bin we had on the side of the house.

We’re now using most kitchen scraps as compost, instead of just those three foods.

Sometimes we’d bury the food scraps directly in the ground, but mostly we stored it in the trash bin and waited about a month or so for the foods to break down. This is quickly amending their dry soil and the plants are LOVING it.

My studio apartment had one pretty sad window. It was just the sliding glass door to the balcony that was directly behind a Smart and Final. It got a measly two hours of sunlight a day.

After hearing about microgreens, I set up a rig and got started.

If you try growing plants indoors, you’ll find that grow-lights aren’t as great as the LA sun (no surprise there). So, if you have plants that need 6 hours of sunlight, you’ll probably need around 18+ hours of light from grow-lights.

But once you get them set up, they’re easy to automate. I had a cheap, programable timer on my power outlet, so I didn’t have to worry about turning the lights on and off. All I had to do was water and harvest.

5. Not ready to start? Try CSA

If you’re not ready to make the jump to homesteading, Community Supported Agriculture is a great alternative.

Basically, instead of buying produce at big chain grocery stores (which is often a week or two old), you buy them directly from the farmers. To make it even easier, most of them deliver the boxes to your doorstep.

And it won’t break the bank. You’ll probably even save money as the produce you get from CSAs are often a better quality and cheaper than store-bought.

There are many different CSAs in the LA area, so take a look and see which ones you’re interested in supporting.

It doesn’t matter if you live in a tiny studio or a house with a small backyard. You can start your LA urban homestead as soon as right now.

Before you go out and buy a bunch of materials, think about what would work best with the space you have to work with.

Ask yourself, “What grows well this time of year?” and “Why do I want to start homesteading?”. Is leafy greens or squashes? Is it to add more nutrients to your diet? Or do you want to grow most of the calories you eat?

Either way, know that you have options. If you’re not in the right place to start growing right now, you can still save money, get good food, and live vicariously through CSAs.

link to The Top 3 Orange Tree Fertilizers You Can Buy

My parents have an orange tree and the last growing season didn't provide as many fruits as the previous. While this is normal behavior for some citrus trees, they wanted to know what the best orange...

There was a time when my potted Meyer lemon tree was dying, and I was pressed on time to figure out why. Unsure of where to start, I started doing some searching online and tested some solutions....